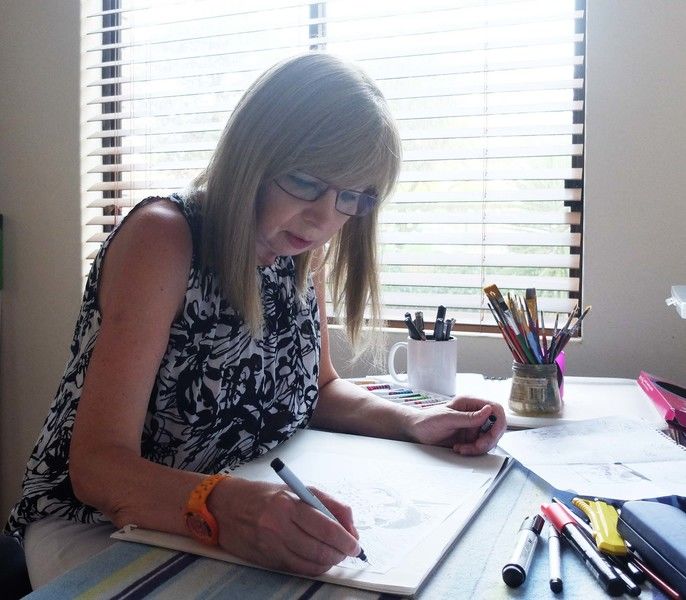 I am a Sydney based artist and the creator of the fictional cartoon-character known as Gertrude. As “a somewhat middle-aged gal” , she is trying to “figure it all out”: and HER way. Gertrude is my alter-ego and is modelled after my own disasters in my kitchen, my reluctance of following recipes, and y Read More...

I am a Sydney based artist and the creator of the fictional cartoon-character known as Gertrude. As “a somewhat middle-aged gal” , she is trying to “figure it all out”: and HER way. Gertrude is my alter-ego and is modelled after my own disasters in my kitchen, my reluctance of following recipes, and yet my fascination with the world of food! With a tendency to day-dream and procrastinate, and fearing her kitchen is really out to get her, Gertrude secretly hopes to one day become a contestant on the TV-show MasterChef!

I use Copic Multiliner pens and markers, archival Staedtler Pigment Liners, ink and gouache to give Gertrude form and dimension. The first ink drawings of Gertrude were penned in 2015 and are these days posted regularly on social media. Created for an age-less audience, she is an interactive cartoon figure, and followers frequently have conversations with her and “cheer her on”. My aim is to one day successfully license Gertrude, and to have her appear regularly nationally and internationally in magazines and newspapers.
Read Less

I am a Sydney-based artist who specialises in illustrating for children and for those young at heart. My work is recognized for it’s mayhem and surreal themes, and whimsical characterisations of humans and animals. The inspiration for my compositions comes from observing and challenging expected ideas and Read More...

I am a Sydney-based artist who specialises in illustrating for children and for those young at heart. My work is recognized for it’s mayhem and surreal themes, and whimsical characterisations of humans and animals. The inspiration for my compositions comes from observing and challenging expected ideas and predictable outcomes. I want the viewer to find something endearing and surprising in every corner of the canvas/paper, and something they have not seen before. I am a visual story-teller, a cartoonist and a writer, and my signature style is my combining of different planes of reality by placing my subjects in (often) impossible predicaments!

I spent part of my childhood in Sweden, and became aware at an early age that I wanted to illustrate stories. I was inspired by the Swedish illustrator Bjorn Berg’s caricatured pen and ink drawings of the mischievous boy Emil, and Finnish author/illustrator Tove Jansson’s inked comic strips of the Moomintroll-family . My father encouraged my keen interest in the drawing medium, and he shared his obsession with the beautiful Walt Disney animated movies and comic books. It is no accident that I have inherited my father’s fascination with the unconventional, and his off-beat and quirky sense of humour. I developed an obsession with horses at the age of twelve, and produced a collection of cartoons featuring (sometimes) ill-fated talking horses with a childhood friend. Titled the “A Good Laugh Books”, the books still exist today.
My family migrated to Australia in the 1970’s and settled in the NSW country music town of Tamworth. After completing the HSC, I enrolled in the BA(Visual Arts) at Newcastle University, and majored in Plant and Wildlife Illustration. During my studies, I was fortunate to be mentored by UK relief-collage artist Jeannie Baker (“Where The Forest Meets the Sea”) and the late William T Cooper, famous for his bird illustrations. The course content was presented from a scientific point, however I delivered my graduating body of work as a collection of cartooned horses, elephants, birds and pigs and camels, set in amusing predicaments and with limericks! In spite of slightly steering off the scientific path I graduated with Distinctions in both my written and my illustration portfolio. In 1988 I was offered a children’s picture-book publishing contract by Melbourne publisher Lothian, and my book “Hugo And The Camels” became available in bookshops and libraries around Australia by 1990. HATC was illustrated using mixed media: ink, water-colour, gouache and colour pencils. It was written for a young audience between ages 5-12, and tells a story of a young boy who hides three mischievous camels in his wardrobe, but mayhem breaks out when Hugo’s mother goes shopping!

After having made Sydney my home since the early 90’s, and having married, I have continued exploring my signature style in different mediums, like in my curvaceous “swim-suited” raku clay sculptures of women’s torsos, and in my acrylic paintings often featuring small mice having adventures! I have successfully exhibited in numerous local group exhibitions with Randwick Art Society (RAS), have been a finalist in the Waverley Art Prize drawing category in 2013, in the painting category in 1996, and in the sculpture section in 1997. In 2015 I was awarded the Patricia Reid Miniature Prize and a Portfolio Art Licensing Award from ArtSHINE Gallery. Collaborating with five local women artists, the all-female group “WIPAS” was established and resulted in a group exhibition at Bondi pavilion in 2013.

Gary Larsson’s The Far Side has no doubt had the strongest influence on my illustration style. His single-panel pen and ink cartoon series of a surreal world, often featuring cows, birds, and insects characterised as humans, have given me confidence that my very own out-there ideas can work and can be successful!

In 2015 I penned the first ink-drawings of my cartoon character Gertrude, my alter-ego. Her character is modelled after my own failures and disasters in the kitchen, and my reluctance with following recipes. Gertrude simply does things her way, but fears her kitchen is out to get her! She secretly dreams of becoming a great chef, but day-dreams. Gertrude’s predicaments are regularly posted on social media. She is an interactive cartoon figure, and followers are able to “interact” with her and cheer her on. Gertrude’s character will be launched in ArtSHINE Gallery’s March group show “Eclectic”, featuring nine artists showcasing their unique signature styles.

Currently I work in a small private studio situated in the Eastern Suburbs of Sydney. I accept commissions and many of my acrylic mouse-themed paintings for children have been sold in local exhibitions. As a committee member of Randwick Art Society (RAS), I have recently had my work selected to hang in the Combined Art Societies of Sydney Annual Maritime Museum Exhibition in Darling Harbour. Also in a volunteer role I am the co-author of and photographer for RAS’s quarterly newsletter. Having completed a teaching degree in 1984, I have taught in the disability field and at high school level, and most recently at the Junction Neighbourhood Centre Randwick.
Read Less