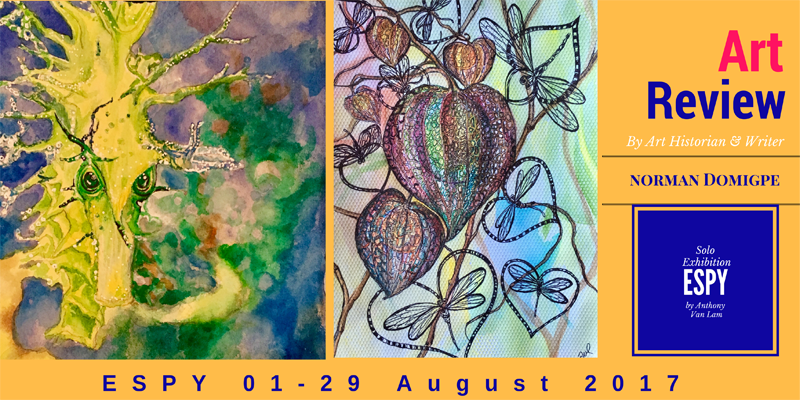 It was a pleasure to have seen the 2nd solo exhibition of Anthony Van Lam entitled ESPY at ArtShine Gallery in Chippendale before it opened to the public on the 5th of August. The bright, airy and spacious gallery resembled the artist paintings that decorated the wall as if the aural and vivid sunny weather outside was brought inside. Such was the effect of Anthony’s nature inspired paintings. The bright canvases brought colour and drama to a rather flat and bare white wall of the gallery and almost immediately I knew that I was in for a treat. The exhibition will run until the 29th of August, and ArtShine Gallery will host an Artist Long Lunch on the 20th. 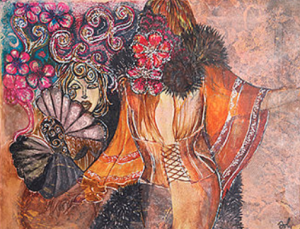 It cannot be denied that Anthony’s style in painting emulates popular movements during the late 19th century called Art Nouveau and Symbolism. The likes of Gustav Klimt, Lady with a fan and Clara Driscoll populated their canvases with geometric patterns, trees and flower blossoms and depicted it in the most organic and animated way. On the other hand, Dante Gabriel Rossetti’s painting like Paolo and Francesca da Ramini focused on the inner eye and imagination. These characteristics of each movement described the paintings that I see today in this exhibition. It is fair to say that one must take pause and reflect on each painting to fully understand its meaning. 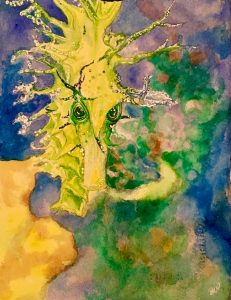 The watercolour paintings of Anthony were often viewed as childlike due to the heavy scroll of lines, asymmetrical compositions, naive and organic. But what sets it apart was the intricacy, careful attention to details and personal messages in each painting. The painting entitled The Interaction between dragonflies and Chinese lanterns was endowed with expertise in both technique and draughtsmanship. The tiny, heavy detailing of the Chinese lanterns was juxtaposed with the soft, pastel watercolour wash producing an atmospheric perspective on such a flat surface. The same thing can be said to this small painting but equally notable entitled Keeping a watchful eye. The perspective on this painting was special compared to the rest. Anthony used a foreshortened view of the seahorse instead of the usual, common view (which is on its side) and merge it with blots, dabs and soft washes of watercolour pigments thus producing depth and space. Indeed such figure was depicted as it was intended, keeping an eye to the viewer, which made the painting interesting and a conversational piece. 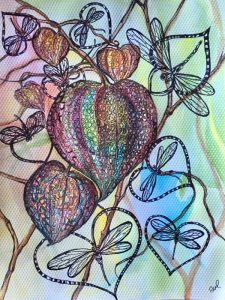 The Interaction between dragonflies and Chinese lanterns

Another work was the painting entitled Running in the fields wherein you can see the movement and almost feel the heat radiating from the canvas. Anthony had mentioned that what he wanted to portray was that feeling of glee and freedom coupled with our memories that impersonate shadows, hence the inclusion of the white lace, intricately drawn, in the middle of the picture. Again, Anthony tried to incorporate, unconsciously perhaps, the two art movements mentioned above wherein observation and reflection produce a harmonious picture. This I believe is Anthony’s oeuvre, that his paintings can be interpreted in so many ways and to treat it purely as a decorative art will not give justice to the effort given to each piece.

Running in the fields

The whole exhibition was a mix of different paintings and can get a little bit overwhelming. I had the difficulty of finding where to start and to focus on one central theme. After a careful reflection, I realised that the reason the exhibition was curated this way was that I needed to see it from a distance, hence the title ESPY, to discern from afar! It made sense, and by pure observation, I saw Anthony’s focus on all living things that inspired him in this life. Nature became his subject and was treated like a religion.

This second solo exhibition of Anthony showed his prolificity in painting and how he grew creatively from the start. His devout focus on nature in this show brought a different perspective in life since each piece of painting was veiled with meaning that can be deciphered only by the artist and its viewers. This made my visit worthwhile.The show was not static. It was engaging and intriguing at the same time, most probably like the artist himself.

About the art historian and writer – Norman Domigpe 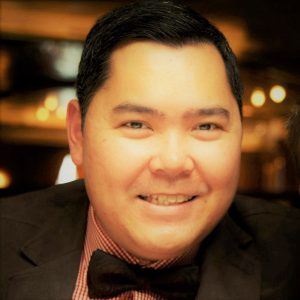 My name is Norman Domigpe, and I love anything that is related to art. Since being very ‘artsy’, I tried everything when I was little. Tried dancing, failed. Singing, failed. Played the piano and violin, failed. Painting, failed. But the history of art intrigued me big time, so I started collecting and writing about art. I believe that art is the only medium that affects all the senses.

I am undertaking postgraduate studies under the program, Masters of Art History from The University of Adelaide. I finished a graduate diploma course on Art History from the Art Institute London and attained an undergraduate degree in Psychology.

As a writer, I have written reviews on Aboriginal, Australian and Contemporary Art and I contribute some of my works to ArtShine Gallery.

You will see me around, especially on exhibitions. Would love for you to say hi.